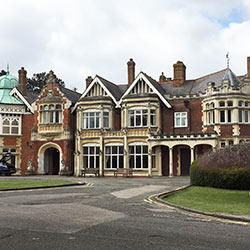 Yesterday I was lucky enough to visit Bletchley Park, nestled in the Heart of England between Oxford and Cambridge, this former military establishment played a key role in speeding up the end of the Second World War by an estimated 12-18 months.

Located outside of London and far away from the risk of wartime bombing, Bletchley Park showed great appeal to MI6 and GC&CS as a possible hub for the intelligence services. The mansion and 58 acres of land were privately brought for a princely sum of £6,000 in 1938, before the war had even started, the purchase was kept secret from even the Government – just in case any spies tipped off the German forces.

Following war breaking out around 150 people came to Bletchley to begin code-breaking operations. As operations expanded large wooden huts were built on the lawns surrounding the mansion. The first break of the Enigma came in January 1940 when a team of codebreakers managed to crack ‘The Green’ the administrative key used by the German Army. Following from this success they then cracked ‘The Red’ used by the German Air Forces. In later stages of the war Italian and Japanese systems were also broken.

By the end of the war around 10,000 people worked at Bletchley Park, all of whom were sworn to absolute secrecy. Its perfect location meant that the brightest minds from Oxford and Cambridge Universities could be recruited plus personnel from top London banks who then turned codebreakers. 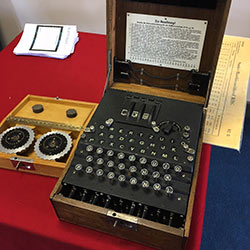 After the war ended, Bletchley Park’s operations moved to the brand new GCHQ in Cheltenham. The secrets of Bletchley Park remained hidden until 1974 with the entire country not knowing the hard work that thousands of codebreakers did to bring the war to a close. Only once 30 years had passed did one former employee record memoirs of their time which led to the whole operation being uncovered.

Designed after WWI, the Enigma machine looked similar to a typewriter, it was adopted by German forces between 1926-1935. In order to decrypt an encoded message sent via the enigma machine, codebreakers needed a code sheet which showed the settings needed for that particular day plus a daily password. This would be reset at midnight and the codebreakers at Bletchley would be forced to start again, day after day…

In 1991 the Bletchley Archaeological and Historical Society was formed with the aim of saving the site and preserving its history. Today the attraction welcomes over 250,000 visitors per year with new buildings being restored – the newest is Hut 11A which opens March 2018.