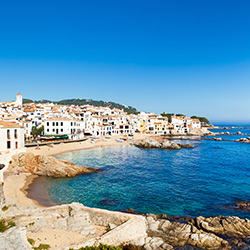 You will find many resorts and hotels in which to stay in to make your coach holiday the best experience possible. All though it is one of the most visited places for British holiday makers searching for a cheap break away during their summer holidays.

If you want to explore further you can visit some of Spain’s most popular cities that include Girona and Barcelona in close vicinity of Costa Brava. Exploring further out you will get chance to visit Tarragona and Salou in Costa Dorada. Benidorm and Alicante in Costa Blanca are also places worth visiting on your coach holiday.

If you want to visit locations with a less greenery you could go to the north of Spain, Costa Verde on the Atlantic coast where history and nature have remained. Cape Verde is made up of 10 isles floating in the Atlantic Ocean, 500 kilometres off the coast of Senegal.  Visit here for out of the world beaches and a lively surfing scene, not to mention all year round sunshine.

Barcelona is a fabulous and beautiful city not to be missed when in Spain. Take in some beautiful weather and combine a city and beach trip in one go! What’s not to love? You can amble down Las Ramblas and sit in one of the many restaurants drinking sangria and eating taps whilst you watch the world go by.  Visit the marina and relax on the beach, or simply hire a bicycle and cycle along the promenade in delightful weather. Be sure to visit La Sagarda Famillia, Gaudi’s master piece and take an audio tour through this incredible building and understand Gaudi’s inspiration.  Jump on a hop on hop off bus tour and visit the sites including Park Guell, Camp Noux and many other delightful sites that the city has to offer.

For something extra lovely take a trip to Seville, the capital of southern Spain’s Andalusia region.  It is most famous for flamenco dancing, particularly in its Tirana neighbourhood.  Major landmarks here include the ornate Alcazar castle complex, built in the Moorish Almohad dynasty, and the 18th Century Plaza de Toros de la Maestranza bullring.  The gothic Seville cathedral is the site of Christopher Columbus’s tomb and a minaret turned bell tower, the Giralda and certainly worth a visit.

For something a little different head to Puerto Banus, which is located in the Nueva Andalusia suburb of Marbella.  Although initially it may appear as a developed old Spanish fishing village with an impressive mountain backdrop, Puerto Banus was in fact built and designed in 1970 by local property developer Jose Banus as a Luxury marina and shopping complex. Puerto Banus is known as Costa del Sol’s playground for the wealthy and rich that come here for the shopping, beaches and buzzing nightlife. There are ample expensive shops for you to spend your money in and during summer months you may even spot a celebrity or two.

A well known Spanish city is Valencia.  Valencia is a port city that lies on Spain’s southeastern coast, where the Turin River meets the Mediterranean Sea.  It is known for its City of Arts and Sciences with futuristic structures including a oceanarium, planetarium and interactive museum.  Valencia also has several beaches, including some within nearby Albufera Park, a wetlands reserve with a lake a lovely walking trails for you to enjoy.

When in Spain why not visit the capital of Spain, Madrid.  Madrid is an elegant city of boulevards and expensive manicured parks such as the Buen Retiro.  It is well known for its repositories of European art, including Velazquez, Prado museums work by Goya and other Spanish masters.  The heart of old Madrid is the portico-lined Plaza Mayor, and nearby is the baroque Royal Palace and armoury that displays historic weaponry.

Spain has such a lot to offer you and all of your family and is such a diverse country to visit.  There are many different types of accommodation ranging from posh hotels to hiring a small holiday let or staying in a local bed and breakfast. The food in Spain is exquisite and there is so many local specialities for you to enjoy.

If you are seeking a holiday to Spain by air, why not consider taking a coach holiday to Spain instead, you get to see all the great scenery on your way to Spain and on the way home. There is no need for baggage collection and the stress that comes with using airlines as you will take a coach all the way through on a coach holiday to Spain. There is so much to discover in Spain that it is a complete no brainier to use this method of transport. You will find many resorts and hotels in which to […]