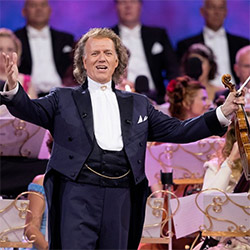 Are you an Andre Rieu fan? Awesome then! You’d be so excited to know that he has so many concerts scheduled for this year. Door2Tour is offering tickets for both Vienna and Maastricht, which are scheduled for May and June, respectively.

Famous as the King of Waltz, this Dutch singer is an inspiration to so many people. If you have never seen him perform live before, now is your chance to do so. All his concerts are exciting, but Maastricht ones have a charm of their own since the place is his own town.

Music fascinated Andre ever since his childhood days. He was the son of a conductor, who handed down the talent to Andre. By studying at prestigious music schools, André polished up his skills and became a renowned singer all over the world.

When he was a child, Andre lived with his brothers and sisters among operas and music symphonies. He began violin lessons at a tender age of 5. His training ended in 1977 when he received a distinction in Brussels.

Andre Rieu established his orchestra much later in the year 1987. During those days, he only had 12 members – the team was small, but Andre still did an amazing job when he first performed on Jan 1, 1988. Today, the orchestra now has 50 to 60 members, all of whom are very close to Andre.

So do Andre Rieu concerts sound fun? Door2Tour offers tours to both Vienna and Maastricht at affordable rates. The duration varies usually between 3 to 5 days. Our coaches are air conditioned and comfortable for the long journeys. Accommodation is included in the rates, and two meals a day may be provided. Book tickets for your André Rieu concerts 2018 Maastricht today!