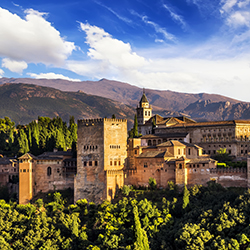 Summer holidays are right around the corner, and it is about time you make up your mind to allow your spirit to become a hostage of Spain’s spellbinding beauty.

Endless pastures of greenery, captivating architecture and, a culture of diversity, acceptance, and vibrancy- Spain is the perfect spot to spend your coach holidays.

With an expansive and rich historic background, the country effusively welcomes you to wander through its magnificent structure of labyrinth for the nourishment of your body and soul.

Are you ready for coach holidays in Spain? Here are five things to see in Spain for a consummated holiday experience:

An emblem of the Muslim dynasty’s legacy, Mesquite is one of the most magnificent mosques to have endured the tests of time and remains a splendorous sight in the western world. Located in the heart of Cordoba, this mosque is known for being one of the largest one in the world and is the talk because of its astoundingly convoluted Moorish architecture that people from all over the world marvel.

Take a look at the astonishing prayer hall that boasts 19 different aisles. You will find the rounded columns and rows of Moorish arches enchanting to look at. What is so striking about these pillars is that they form a symmetrical pattern which is quite a sight.

Standing in the pastoral mountain range of Grana, Alhambra palace is the sigil of the Moorish royalty boasting grand architecture that is a treat to the eye. A reflection of the Nasrid dynasty’s rule and the regime, the dramatic design of Alhambra never ceases to leave jaws dropped on the floor as people all around the globe come to visit this palace.

If you want an insight of the vertex of Islamic culture and civilisation in the west, venture into the mystic abyss of Alhambra palace. Alhambra consists of tall towers, elegant buildings, spiritually energising mosques, lush green pastures of gardens and of course, the stone-carved craft that the Muslims have left as their heritage to the world.

Adjacent to the bewitching extravagance of Alhambra are the symmetrical, terraced gardens that are an ideal escape from the world of opulence. This open-air garden blooms with seasonal blossoms and unbending greenery that allows you to breathe in a mouthful of fresh air in solitude.

A marvel of the contemporary architecture and its futuristic approach to construction, the Guggenheim Museum dwells in the breast of Bilbao. Standing erect with a clever construction combination of refined materials such as whirlwind sheets of titanium and large blocks of limestone, this American-Spanish museum is an illustrious example of the modern architectural achievements.

As you enjoy your coach holidays in Spain, make sure to encapsulate the moments with multiple clicks while using the museum’s awe-striking architecture to serve as an aesthetic background. You will also be able to understand “The Bilbao Effect”- a term which emerged after the charismatic architecture of the museum became known to the world and brought Bilbao under the international spotlight. The museum will also justify its reputation for triggering a ripple effect of “Architourism”- an effect created when a city attracts tourists from all across the world simply for its commendable conventional architecture.

Art aficionados would really savour in every moment spent in this well-known museum that sits on the pinnacle of popularity amongst a vast assortment of divergent art museums all around the world. Located in the heart of pulsating city of Madrid, this world-class art museum is a must stop during your coach holidays in Spain. Prado is distinguished for its expansive art gallery that carries works of legendary artists. In 2009, the museum made an addition to its art collection with 12 fresh galleries that consisted of enchanting works of noteworthy 19th Century artists. So far, Prado holds a distinctive reputation for holding a diverse collection of Spanish art including those from the traditional 12th-century medieval times as well as the conventional, 20th century.

More in Madrid for art fanatics is its long stretch of aligned art museums such as the Reina Sofia National Art Museum, the CaxiaForum and the Thyssen-Bornemisza Museum- all three of which exhibit versatility in their vast array of luminary pieces.

Toledo was the birth ground of a diverse ethnicity- something that is evident from its heterogeneous architecture. A manifold of splendorous buildings thrives in the bosom of Toledo including those that immaculately reflect the periods of Moorish royalty, Gothic grandeurs and the Renaissance movement. The city and its cluster of dilapidated buildings sit on the zenith of granite hills, cocooned by exuberant pastures of greenery and the soothing flows of Tagus River. The town’s morass structure, confined streets and shady alleys that bustle with a flurry of everyday activity demonstrates the typical Moorish culture in the modern world.

A manifold of buildings including convents, churches and cathedrals stand in all their glory in the very heart of Toledo. So if you wish to time-travel into the iconic and exhilarating history of Spain and its conquests, a visit to the Old City of Toledo sounds like a rational place, to begin with.

Spain, right up to the surface, brims with invigorating and vibrant culture. Its beguiling buildings, ancient yet preserved architecture and tantalising street-styled cuisines are extraordinary to experience.

If you wish to make the most out of a tour in Spain, to satisfy your desire of delving into the first-handed experience of Europe’s enlightened land, then contact us at Door2Tour.com.

Reliable and promising of our word, we offer you services of unparallel quality. We believe that actions speak louder than words which is why you should book one of our coach holidays in Spain’s packages and revel in a primary experience of all the opulence the country has to offer.

To hit the road and begin with the adventure, head over to our official website and book your holiday package.